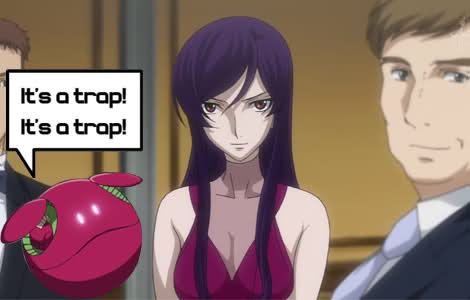 As if the purple-haired, fair-skinned Tieria Erde wasn’t androgynous enough, this week’s Gundam 00 ( episode 8 ) had him cross-dressing! (I guess his Gundam is the only thing that transforms) Fear not, it was all in the line of duty. Tieria reasoned that since it was publicly known that all the Gundam Meisters are male, fake boobs would be the ultimate Scooby Doo disguise.

This is the best plan Celestial Being’s tactical forecaster could come up with? (un)Fortunately there’s no dramatic unmasking when he’s inevitably discovered. At the rate this is going how long before Tieria kisses Lockon? (the new one, not the dead one)