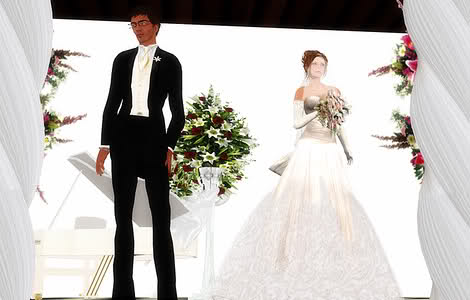 It’s game over for British couple Amy Taylor & David Pollard. The two met online in 2003 playing Second Life but are getting divorced after Amy caught her hubby cuddling with another (virtual) woman in the game. This isn’t the first time David’s avatar couldn’t keep his pixels in his pants.

Amy broke up with David’s avatar after she found him cybering with a girl named Modesty (it’s unknown who got the Cobra helicopter gunship or the church they lived in). But this wasn’t just some tawdry fling Modesty explains, “When we first met, it was at a fancy-dress night on the game, and he noticed me across the room and said he felt something special.” David has even proposed to Modesty, despite never having actually met her. Unfortunately, she lives in America. And unlike his action hero alter ego, David’s unemployed. In fact, they’re all unemployed.