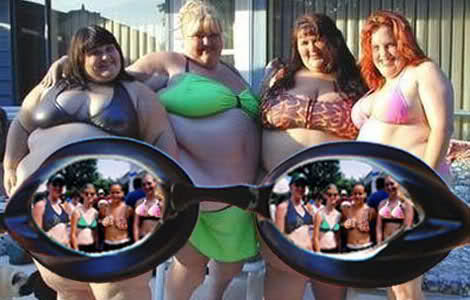 A new study out of Britain claims alcohol consumption does not impair men’s abilty to judge attractiveness or age.

Researcher Dr. Vincent “Buzzkill” Egan of the University of Leicester goes on to say, “Our findings seem to fly in the face of the commonly-held ‘beer goggles’ notion. If people regret liaisons next day, it’s not because they thought their lover looked like Elle Macpherson and wake up to realise the truth.”

But don’t pour that beer down the sink just yet!

This so-called study is more slanted than my aunt Petunia after a few wine coolers. First off, the study was conducted in pubs, but not nightclubs were lighting could be factor. Also of the 240 participants only 1/2 consumed alcohol and of that 1/2 only 1/3 were legally drunk, so of course you’re not going to find statistically significant difference when you compare 40 drunks to 200 (mostly) sober people.

Participants rated pictures of 17-year-old girls that were digitally altered to appear either younger or older. The results found that men consistently overestimated age regardless of whether they were drunk or sober and that not surprisingly younger faces were considered more attractive.

Clearly the study had more to with age than attractiveness. In fact, Egan admitted his real goal was to dismiss alcohol as a legal defense in underage sex, “Our study suggests that even heavy alcohol consumption does not interfere with age-perception tasks in men, so does not excuse apparent mistaken sex in cases of unlawful sex with a minor.”