Jameson Sticks “it” to Parker 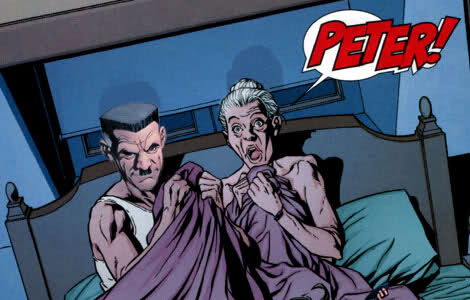 Amazing Spider-Man #592 ended with what’s gotta be the most disturbing cliffhanger ever: Peter Parker walking in on Aunt May having sex with J. Jonah Jameson (spider sense, what spider sense?).

No not that J. Jonah Jameson. Although that would be pretty sensational as my photoshopping shows.

It was actually J.J.’s father J. Jonah Jameson Sr., but Peter will probably get over it pretty quickly as Jameson Sr. is the one that actually likes Spider-Man. And that’s exactly why it should have been J.J., just think of all the awkward holiday issues.

The same is true for Parker’s new mystery roommate. Apparently it’s some girl but I really hope it turns out to be Eddie Brock (AKA Anti-Venom). Eddie’s already shown he’s determined to help Peter whether he likes it of not, and talk about an odd couple. But who knows maybe that girl was Eddie. Remember the symbiote allows him to disguise himself as anyone.

Now Peter making out with his sexy roommate who turns out to be Eddie Brock, that would be really disturbing. But not altogether unbelievable. After all, Venom always had an unhealthy obsession with Spider-Man. Maybe it’s time to take it to the next level.