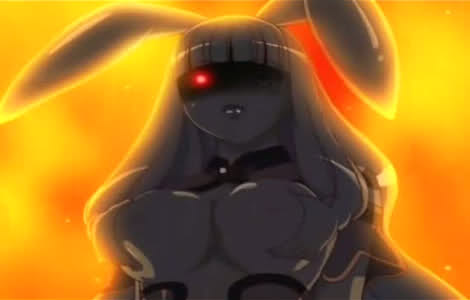 There’s no pussyfooting around it, Queen’s Blade

is about one thing and one thing only: FANSERVICE.

It’s based on a gamebook, you know those Choose Your Own Adventure books where you pick from a list of choices and turn to the corresponding page, so don’t expect a lot in the way of story. All you need to know is there’s a battle royal to decide the next Queen. The only rule: you have to be at least 13-years-old (but judging by the breast size they’re considerably older than that).

All the girls are scantily dressed but none more so than Mellona (picture above). This bunny girl’s bra leaves little to the imagination. The two hands that cover her breasts (sometimes) are telepathically controlled and squeeze out acid, which eats through her opponents’ clothes. Now that’s what I call an ultimate attack.

As wild as that is, what really got to me was the main character Leina wetting herself not once but twice! Keep in mind this is all in the first episode so I can just imagine what happens in later episodes. Expect LOTS of updates.