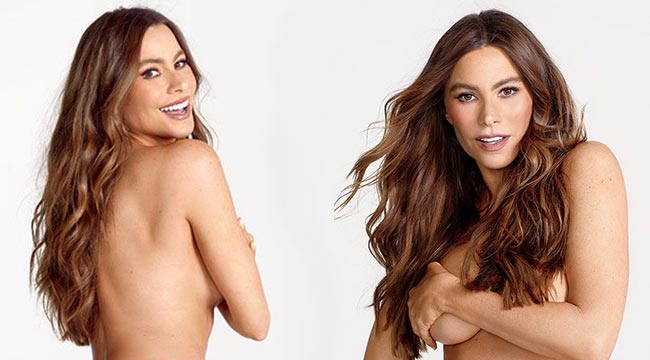 Modern Family fans, get ready to see a lot more of Sofia Vergara. The actress is getting lots of exposure in a nude photo shoot for Women’s Health magazine as well as a sex scene in the upcoming thriller Bent.

The shoot was completely nude with the exception of a few photos featuring her new line of underwear, EBY, which gives 10 percent of sales to women seeking microfinance loans to start a small business. Vergara also needed strategic hair placement to cover up unlike some more skinny models.

“They’re all of tall models holding their boobs with one arm. But I can barely cover my boobs with two arms—I’m a 32-triple-D! My boobs are real, and I had a baby. If I grab them, I can’t even cover the nipple!” she explained complete with a visual demonstration.

Bent is a departure from the comedic roles Vergara is known for. Her character is described as a “ruthless, seductive government agent.” She partners up with a framed narcotics detective (Karl Urban) seeking revenge after he’s released from prison. The two have a steamy shower scene, which will presumably be sans underwear.

The noir style film is directed by Robert Moresco (The Black Donnellys).

“‘Bent’ delivers on the best of film noirs — a main character driven by revenge, who is forced to choose between the truth he knows, the evidence against that truth, and the woman he loves most in the world,” producer Andrea Iervolino told Variety. “Sofia and Andy are a powerful onscreen trio who have a rich story to work with, thanks to the brilliant story and characters created by Bobby and Joseph.”

Joe Manganiello is bent out of shape over his wife’s latest work.

“Joe’s like, ‘Fuck, you’re going to be naked in everything now? Why?'” she recounted.

The actress blames her agent for the roles but she’s grateful to still have the opportunity to pose nude at 45 years old despite having what she says are bad pores and loose skin. Vergara pushes herself to stay in shape by working out 3 to 4 days a week with a personal trainer.

Those workouts are made even harder by resistance training courtesy of her 32DDD breasts.

“I don’t know if I’m strong. I have bad knees and very thin bones; I can barely do a pushup,” she said. “I wish I could be a little more athletic, but when you’re born with these gigantic boobs. . . I’ve had them since I was 13, and then they got bigger when I was pregnant and had the baby.”