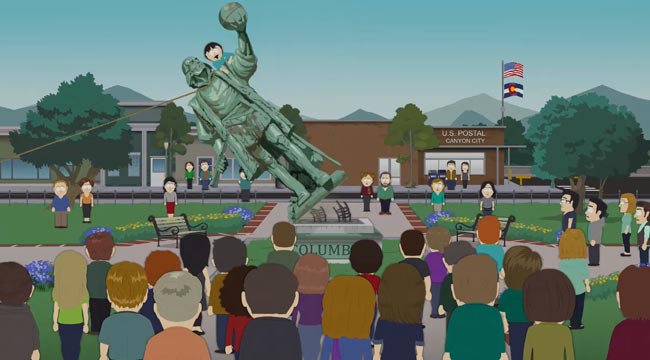 Christopher Columbus is not welcome in South Park, a fictional town in Colorado, which was the first state to celebrate Columbus Day. Stan’s father, Randy, gets woke in the latest episode “Holiday Special.” He convinces the school to cancel the holiday that honors a “genocidal murderer.”

Randy doesn’t stop there. He takes it upon himself to tear down a Christopher Columbus statue. The scene lampoons protesters taking down a Confederate statue in Durham, North Carolina. He even travels to New York to defecate on the Columbus Circle statue. The actual statue was similarly defaced by a vandal, who painted the fingers pink to represent the blood on his hands. Mayor Bill de Blasio has formed a committee to “review of all symbols of hate on city property.”

Stan accuses his father of overdoing it when he starts phoning people and calling them racist simply for living in a city named Columbus.

“You have to overdo it in today’s society, Stan. You can’t be nuanced and subtle anymore or else critics go, ‘Oh wow. What was the point of that?'” Randy explains.

The kids fight to to keep Columbus Day. They don’t care about tradition or Italian pride. For them it’s all about getting a day off from school. Cartman recites his own version of the famous “In 1492” poem.

“In fourteen hundred ninety-two, Columbus got us all a day off school. With just three ships he sailed over, so we could have some me time in October. And yes millions were slaughtered and throats were cut, but if don’t we get that day off of school then for what?”

The kids don’t understand what the controversy is about so they do an internet search for offensive images of Christopher Columbus. What they find is boatloads of pictures with Randy in dressed up as him. Randy explains that 2013 was a different time when everyone loved the historic figure. He concocts a plan to fake having Native American ancestry after watching a television commercial for a genetic testing company called DNAandMe, a parody of 23andMe. The commercial features white people discovering distant minority ancestry that can be used to play the race card. “I’m 13 percent victim,” touts one women.

Randy pays a Native American to swap spit in order to trick the mouth swab test but the man is convinced the kiss is real and starts stalking him. Unfortunately, a passerby catches Randy in the act of kicking the Native American of his land while disposing of his Columbus memorabilia. The hypocrisy causes the school to reconsider its decision.

Randy repeatedly confuses the word indigenous with indignant, an accurate description of both sides of the debate. He really gets ‘indigenous’ when his DNA test reveals Neanderthal ancestry. The company explains that Neanderthals were wiped out by Homo sapiens but some interbreeding occurred. Randy immediately accuses everyone of rape and genocide. The Native American pleads for Randy to be honest about his feelings. Randy accepts that he is ‘indigenous’ and encourages others to do the same on a new holiday called Indigenous Peoples’ Day.

In fact, Indigenous Peoples’ Day is a real holiday created in 1977. Dozens of cities have adopted it including several in Colorado. Currently, Columbus Day is not observed in 22 states: Alaska, Arkansas, California, Delaware, Florida, Hawaii, Kansas, Kentucky, Louisiana, Maine, Michigan, Mississippi, Nevada, North Carolina, North Dakota, Oklahoma, Oregon, South Dakota, Texas, Utah, Vermont and Wyoming. And less than half of states give workers the day off according Pew Research. However, Columbus Day remains a federal holiday.