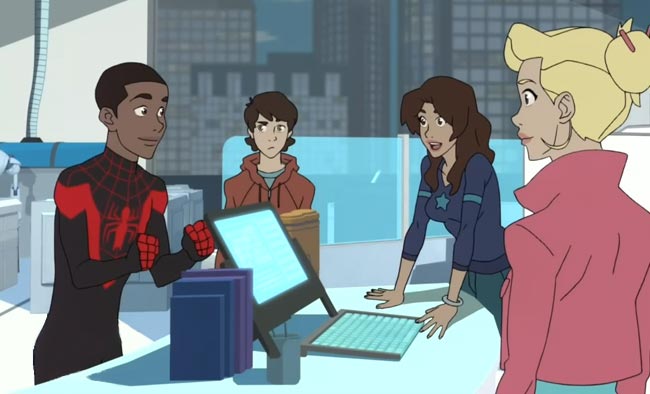 Marvel’s Spider-Man gets upstaged when Miles Morales swings into the spotlight in “Ultimate Spider-Man.” The character was first introduced as the web slinger of an alternate Earth in the Disney XD series Ultimate Spider-Man: Web-Warriors. The Miles of this Earth is a gangster working with the Kingpin as revealed in the comic book miniseries Spider-Men II.

The latest incarnation of Ultimate Spider-Man is from this Earth but he’s more of a wise guy than a gangster. He actually gets bullied more than his classmate Peter Parker AKA Spider-Man. Things turn around when Miles is bitten an all-new, all-different radioactive spider, and just in the nick of time. He literally jumps into action to save Spider-Man after he’s knocked unconscious and nearly falls to his death.

Miles (Nadji Jeter) is eager to show off his newfound abilities. He unmasks in front of Peter (Robbie Daymond), who hasn’t shared his secret with anyone. Peter lectures him about secret identities but Miles immediately reveals himself to their classmates Anya Corazon (Melanie Minichino) and Gwen Stacy (Laura Bailey). They suspect it’s not a coincidence that two people have received spider powers.

“Maybe there’s something going around,” Anya surmises. “Maybe we can all get spider powers!”

Spider-Man and his Amazing Friends

The comics are crawling with Spider-Men and a proportionate amount of Spider-Women. Anya Corazon got spider powers from a mystical cult known as the Spider Society. Anya initially calls herself Araña, Spanish for spider, but she reluctantly takes up the mantle after being called Spider-Girl one too many times. On an alternate Earth, Gwen Stacy is bitten by the radioactive spider instead of Peter Parker. She becomes Spider-Woman AKA Spider-Gwen and inspires Peter to become a superhero. He uses mad science to transform himself into a rampaging Lizard and dies in a fight with Spider-Woman. It mirrors the tragic loss Peter felt losing Gwen in the main continuity.

The cartoon teased the possibility of more Spider-Man clones in the future. Norman Osborn (Josh Keaton) reveals that he created the Spider Slayer robots as a countermeasure for a spider army experiment by Professor Raymond Warren (John DiMaggio) AKA Jackal AKA the guy responsible for the infamous Spider-Man Clone Saga in the 90s. Warren also gave everyone in Manhattan spider powers that ultimately transformed them into actual spiders in the comic book event Spider-Man: Spider-Island.

Norman explains he held on to two of the experimental spiders in order to create a cure. That means he could depower any of them . . . even Spider-Man!

Miles initially abuses the powers much like Peter did before the death of his Uncle Ben. Spider-Man inevitably breaks out his catchphrase: “With great power comes great responsibility.” The profound revelation is interrupted by Miles, who guesses that great power comes with great “people skills” and “cell phone reception.” He’s disappointed when he learns it comes with responsibility.

“Responsi-what-now?” Miles quips. “I wasn’t bitten by a police officer. I was bitten by an awesome spider.”

Ultimate Spider-Man uses his power to get some payback from bullies and show off for the cameras. He foolishly announces where he lives on live television but insists that no one is going to come for him. Naturally, Spider Slayers come for him.

“Looks like that spider bite gave me great comedic timing,” he jokes.

Ultimate Spider-Man saves the day when a new power emerges. He shorts out the robots with a bio-electric shock called a Venom Blast. That’s not his only unique power. Miles also possesses a camouflage ability that makes him invisible though it has yet to be revealed in the cartoon. Miles is more concerned with the fact that his webs haven’t grown in yet. Peter reveals that the webs are not organic and gives him an extra pair of web-shooters. The scene is reminiscent of the comic, in which Miles receives the the web-shooters and blessing of the Spider-Man of his universe.

“Because after testing numerous scenarios and experimenting with the PSI, I realized . . . this way is just more awesome!” he exclaims.