Happy endings are for children’s books as illustrated in The Walking Dead episode “The Obliged.” Michonne (Danai Gurira) reads a poorly chosen picture book about baseball to Judith (Chloe Garcia-Frizzi). Halfway through the book, she comes to a picture of a bat that reminds her of Negan’s bat, Lucille. She promptly closes the book with a generic “The end.” We, as adults, know it’s not.

The children’s book if the perfect metaphor for the series. Creator Robert Kirkman has called the Walking Dead a “zombie movie that never ends.”

“I don’t like the way that zombie movies end,” he explained during an appearance of Late Night with Seth Meyers. “Most zombies movies are about a group of interesting people doing interesting things, fighting zombies. And then the time runs out and they’re like ‘Well, that was a lot fun. We’re all gonna die now or we’re gonna ride off into the sunset. You’ll never see us again. And I just wanted to do a story about how these people continue to survive and find food and how messed up it makes them over a long period of time.”

The episode opens with Michonne (Danai Gurira) attempting to live a normal home life but she keeps finding herself drawn to her katana. She sneaks out in the middle of the night to kill zombies. One night, a zombie gets the drop on her. She desperately reaches out for a bat to defend herself. She drops it in disgust when zombie brains wrap around the bat giving it the appearance of Lucille.

Her connection to Negan (Jeffrey Dean Morgan) is made explicit when he coaxes her into talking to him by threatening to cut his life sentence short with a hunger strike. He gets her to open up to him by reminiscing about his late wife Lucille, whom he named his bat after. Negan contends that she made him weak and the same is true of Michonne’s son, Andrea, who died early in the zombie outbreak. He provokes the bereaved mother by telling her that part of her is grateful he’s dead.

Michonne agrees that they both do what’s necessary but she takes no pleasure in it. She adds that it’s all done out of love for those around her.

Negan pleads to see his only remaining loved one, Lucille. And Michonne realizes that his attempt to build a rapport was all a ploy. She taunts him by claiming his bat was left behind. Negan vows he will see Lucille again before banging his head against the wall in frustration.

Michonne literally closed the book on the bat but her actions ironically suggests the opposite. We likely haven’t seen the last of Lucille and what it represents. The characters don’t live in a static world and won’t get storybook ending.

Case in point, the Judith’s abridged storytime serves as a bookend for another storyline between of Rick (Andrew Lincoln) and Daryl (Norman Reedus), who become trapped in a pit during a fight. They only escape by setting aside their differences and working together as friends. The seemingly happy ending is underscored by the book’s back cover, which reads: “You can’t lose with your friends.” However, the other shoe drops the moment Michonne closes the book. Rick heads off on his own and is impaled on rebar when he’s tossed from his frightened horse. In other words, the story doesn’t end when you stop reading it. 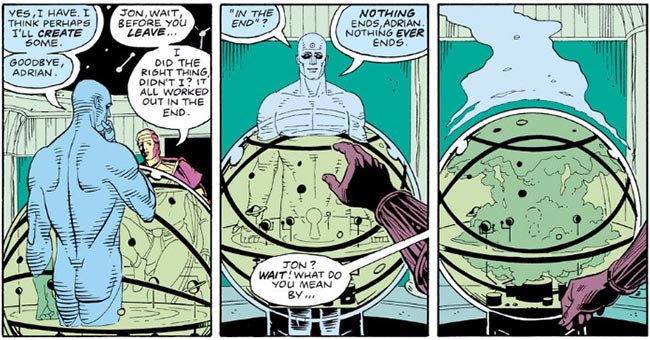 It’s slightly more subtle message than the Watchmen ending. The comic book concludes with the anti-hero, Ozymandias, bringing about world peace by staging an fake alien attack with real fatalities. He looks for absolution from the omniscient Dr. Manhattan. The egomaniac asks if was the right thing to do in the end.

“Nothing ends, Adrian. Nothing ever ends,” the godlike being insists.

Kirkman initially said that he would continue the series indefinitely until cancelled. However, he has since revealed he has an ending in sight. Not surprising given the rate he’s killing off main characters, including Rick who bites it in the aptly named episode “What Comes After.”

This is not a children’s book and as we are not children who should not be content with being told “the end.” Whenever and however Walking Dead ends, we can assume the characters will continue to face new challenges some of which they will overcome and some that they won’t. There’s no such thing as a happy ending. Conversely, there’s no such thing as a bad ending except maybe if they cut to black while eating in a diner.