Doctor Who Christopher Eccleston naked in The Leftovers - L7 World

Doctor Who Christopher Eccleston naked in The Leftovers 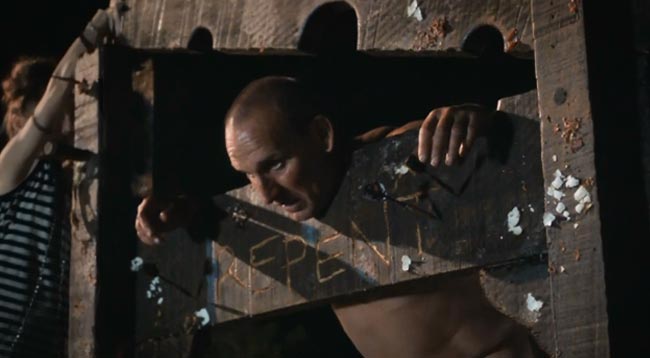 The Leftovers star Christopher Eccleston bares more than his soul in spiritual series about coping after 2% percent of the world is raptured. The former Doctor Who star repents by voluntarily locking himself in a pillory completely nude including a closeup of his uncircumcised penis. It’s the perfect setup for a “it’s bigger on the inside” joke.

Reverend Matt Jamison (Eccleston) struggles to take care of his wife, Mary (Janel Moloney), who is left in a vegetative state following a car accident caused by the departure. They move to the Texas town of Jarden dubbed Miracle because all of its residents were spared. Hundreds flock to the town hoping for their own miracle but only residents and a few lucky visitors granted wristbands are allowed to stay. The rest set up an encampment outside of town hoping to eventually get it.

Matt and Mary are locked out after their wristbands are stolen in “No Room at the Inn.” He becomes desperate to get back in when he learns his wife is pregnant, which he insists was consensual. Matt claims that she briefly woke up after arriving at Miracle. They are offered new wristbands on the condition that Matt admits he took advantage of his wife in a moment of weakness but he refuses. Matt manages to retrieve their bands and get Mary home but he returns to the encampment and offers to take the place of naked man locked in a pillory with the word “repent” etched into it. When a woman asks why he’s doing it, Matt replies “Because it’s my turn.” Could it be an admission of guilt to raping his wife?

The episode opens with the reverend showing his dark side. He snaps after endlessly performing the monotonous routine of caring for his incapacitated spouse. Matt forcibly grabs Mary and yells at her for giving him hope and then taking it away.

“The opening sequence in particular deals with the burden of care — how frustrating it is and how dark and isolating it can become when you’re caring for someone who gives you no reaction or thanks,” Eccleston told The Hollywood Reporter. I thought it was a very brave piece of writing by Damon [Lindelof] and Jacqueline [Hoyt] because to a certain extent, he’s abusing her when he screams and shouts at her. It’s an uncomfortable few minutes.”

When asked if Mary ever actually woke up, Eccleston answered: “I believe that Matt believes it.”