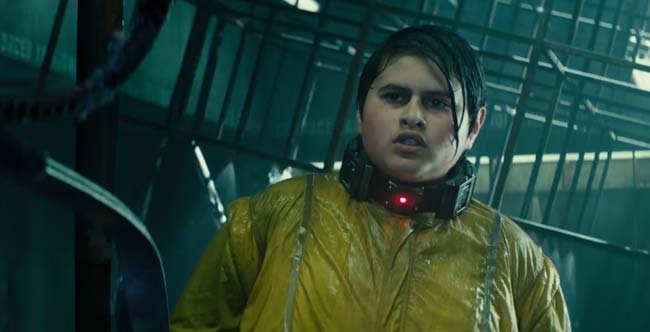 A cybernetic soldier travels back in time to terminate a young boy (Julian Dennison) in . . . er, Deadpool 2. The X-Men are still MIA so Deadpool (Ryan Reynolds) forms his own super duper fucking group: X-Force, an elite team of menacing mutants and Peter (Rob Delaney). Ironically, X-Force was originally founded by time traveler named Nathan Summers AKA Cable (Josh Brolin), who has always been one of the good guys. So why is he after the mysterious mutant?

Who is Julian Dennison?

Little is known about Dennison’s character except that he possesses the ability to shoot fire from his hands. He presumably becomes major supervillain for Cable to travel back in time and kill the baby-faced boy.

Cable has a longstanding grudge against Apocalypse, who kidnapped Nathan by as a baby and infected him with a techno-organic virus that transformed his flesh into metal. His parents Scott Summers AKA Cyclops and Jean Grey AKA Marvel Girl sent their son into the future where he learned to use his telekinesis to keep the virus at bay at the cost of limiting his powers including telepathy. Apocalypse was most recently resurrected as kid Apocalypse; however, even in this form he retains his inhuman skin color. Apocalypse is not known to possess pyrokinesis; however, his son has a similar ability. Holocaust AKA Nemesis can absorb ambient energy which gives him a similar glow. He can release this energy as a plasma burst. Holocaust is every bit as evil as his father and serves as one of the Horsemen of Apocalypse.

There’s the off-chance it’s not really Cable. Nathan was cloned when it appeared he would succumb to the techno-organic virus. Apocalypse raised the evil clone whom he dubbed Stryfe. The clone doesn’t posses a cybernetic arm since he doesn’t suffer from the virus but that also means his powers are stronger. Stryfe could be using his telepathy to make himself look like Cable. It wouldn’t be he first time he’s taken advantage of their resemblance. If it’s Stryfe in disguise that would suggest Dennison is a good guy.

The latest theory is that Dennison is playing the aptly named mutant Firefist AKA Russell “Rusty” Collins. Dennison was previously only referred to as “the kid” but he’s named in the latest TV spot.

Firefist debuted in X-Factor #1. Russel is serving in the Navy when his commanding officer, Chief Fisher, literally orders him to show his friend Emma a good time. He resists her advances, which activates his x-gene. Russel bursts into flames that severely burn Emma. He’s incarcerated but breaks free when Fisher attacks him in his cell and once again triggers his power. Coincidentally, Firefist was later brainwashed by Strfye, bolstering the likelihood of a cameo by the supervillain.

It’s possible that Cable is more concerned with consequences of Russel’s actions. An alternate version of Wolverine murdered an innocent mutant in Ultimate X-Men #41. Upon hitting puberty the boy’s x-gene activated and he began to radiate toxins and acid-like poisons that killed everything within his radius. Logan wasn’t just worried about him killing more people but rather the public’s reaction if they ever found out a mutant was responsible. The X-Man offered the boy a beer before casually ending his life.

Russel’s out of control powers could end up inciting anti-mutant sentiment. Bishop is another time traveling mutant, who comes from an alternate future when humans pass a mutant registration act that eventually leads to creation of concentration camps. If worse comes to worse, Deadpool will hopefully offer Russel something stronger than a beer.